Travel and Destinations in North Sumatra

The province of North Sumatera is home to many of Sumatra’s most popular attractions, including the magnificent Danau Toba, the enchanting Orangutan Rehabilitation Center or the culturally enriching Karo Batak Highlands around Brastagi. It has a population of more than 11 million, with Medan as the main city.

The capital of North Sumatera and the third-largest city in Indonesia, most travelers treat the city as an entry and exit point. Indonesians in general love the city for the amount of authentic food scene this city offers; from Chinese-influenced food such as the bakmi and seafood places and some Indian-influenced street food and restaurants.

If you’re staying for a few days, some recommended attractions include Istana Maimoon, Mesjid Raya, and the two-story mansion of Tjong A Fie (1860-1921), a Hakka merchant who came to own much of the land in Medan through his plantations and became the richest person in Medan. 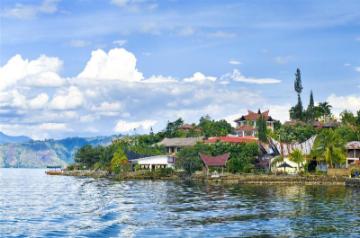 Danau Toba is one of Sumatra’s, and Indonesia’s, most spectacular sights. It occupies the caldera of a giant volcano that collapsed in on itself after an eruption about 100,000 years. Not only that it is the largest lake in Indonesia, but it is also the largest volcanic lake in the world. Out of this huge expanse of deep blue water rises Pulau Samosir, an island almost the size of Singapore. This is home to the Batak Toba people (notice the previously mentioned Batak Karo from the North) the air is cool and relaxing; just try to avoid going here on weekends and long holidays, where busloads of tourists from all over the place would flock all crevices.

Day trips from Medan are available, but staying a night or two is highly recommended. There are numerous hotels and guest houses, mainly in Tuk Tuk but with a few scattered in other small towns around the island.

Located 96 km north-west of Medan, Bukit Lawang is a popular tourist destination known for the largest animal sanctuary of Sumatran orangutan and is home to the Bohorok Orangutan Rehabilitation center, with around 5,000 orangutans occupying the area. It is also the main access point to the massive Gunung Leuser National Park from the east side.  In Bukit Lawang, you can do short walks or trekking to even camping in the jungle, with tour operators and hostels offering packages for one day or multiple day treks. It is the best way to see the local birds, reptiles, a range of tropical plants, and of course, primates.  Apart from visits to the jungle, Bukit Lawang offers a relaxed atmosphere alongside the banks of the Bohorok River, with many guests staying for weeks or months on end.

Berastagi or Brastagi is a picturesque hill town in the Karo highlands, about 70 km from Medan. Situated around 1300 meter above sea levels, this is where you need to be if you’re looking for a cooler and more refreshing climate. It is particularly popular as an entry point and set up the base for ascending to Gunung Sinabung and Gunung Sibayak or even treks to the Gunung Leuser National Park.

Sipiso-piso waterfall, is one of the tallest waterfall in Indonesia. The name Sipiso-piso mean ‘like a knife’; it has 120m high and it located in Tonggiang village, 45 Kilometers from Berastagi at the northern end of Lake Toba.

This waterfall is formed by a small underground river of the Karo Plateau and flows out into the Lake Toba caldera. To get to Sipiso-Piso falls catch a local mini-bus from Berastagi to Kabanjahe At the bus terminal in Kabanjahe catch any bus going to Siantar and ask to get off at Sipiso-Piso.

Sipiso-Piso Waterfall has beautiful scenery and fascinating sightseeing. Among the cliffs that look greenish, the fall water is looking majestic by its grace. As we stand or sit far from the location, we can enjoy the beauty Sipiso-piso and Lake Toba from a distance at the same time.

To reach the bottom of the waterfall, we do have to spend a little extra energy. For the peak of the waterfall is located at an altitude of about 800 meters above sea level. Moreover, the walking trails are steep and winding.

In terms of effort to enjoyment ratio, Sibayak is easily one of the top volcanoes in Indonesia. Situated above the friendly hill town of Berastagi which is just 2 hours from Medan, the volcano’s crater lies just over an hour’s walk from the nearest road and can therefore be explored by anyone in reasonably good shape. The most popular route is from the road at Jaranguda just 3km from the town of Berastagi but some people even just allow an extra hour or so (three hours in total) and walk from Berastagi such is the volcano’s proximity to the town it self.